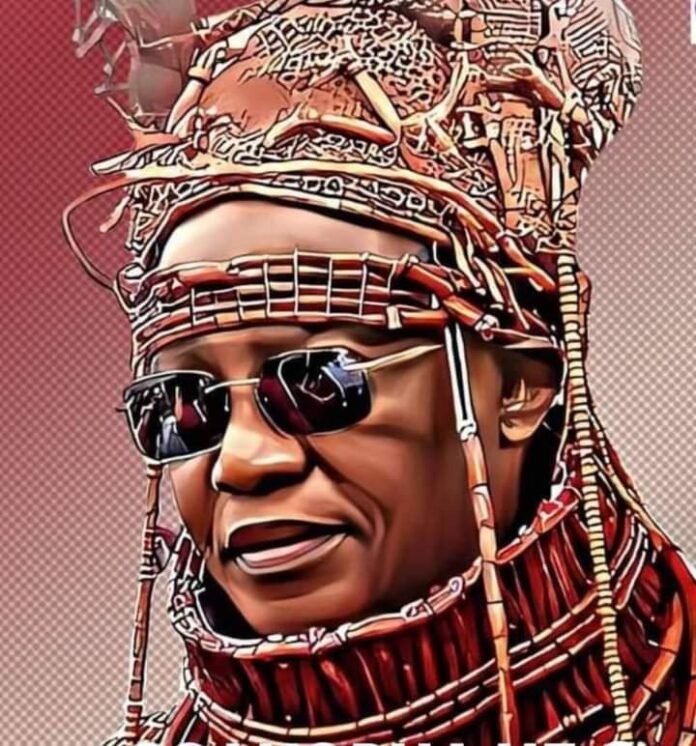 The great-grandson of Philip Walker, a captain of the British Royal forces which invaded the Benin Kingdom in 1897, visited then reigning monarch of Benin – Oba Erediauwa – on Friday, June 20, 2014, and returned two of Benin looted artefacts held by his great-grandfather and inherited by himself. 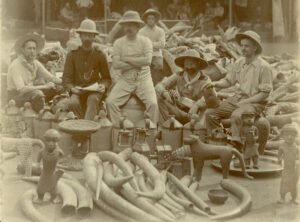 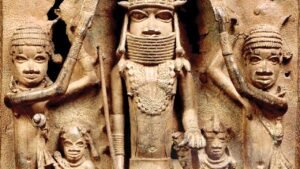 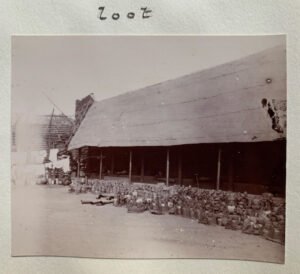 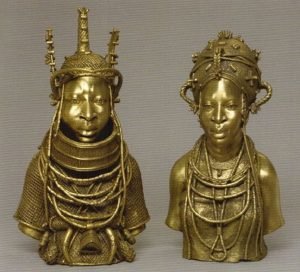 Adrian Mark Walker led a team of his relatives and friends to visit Benin where he returned two statues: one depicting an Ibis and the other, a traditional monarch’s bell which was said to be part of the collections of Mark Walker (Adrian’s father) a retired medical consultant and grandson of Philip Walker (one of the British soldiers which attacked Benin in the famously recorded Benin Massacre of 1897). 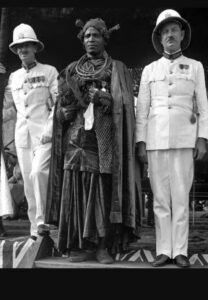 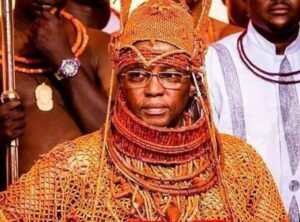 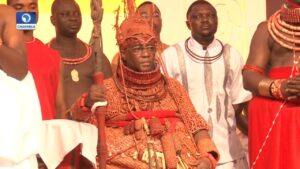 Apart from the Ibis-shaped bronze sculpture and the royal bell, Adrian also gifted the Benin monarch, the diary of the Benin invasion recorded by his great-grandfather.

Receiving the artefacts just two days before his 91st birthday, the visibly elated Oba Erediauwa described the gesture of returning the artefacts to the Benin royal family as the best birthday present he had ever received and urged Britain and other countries who were still in possession of looted Benin artefacts in their homes and art galleries to emulate Adrian Mark Walker by returning them to the rightful owners, the Benin Kingdom. Present at the occasion was then Governor of Edo State, Mr. Adams Oshiomhole. 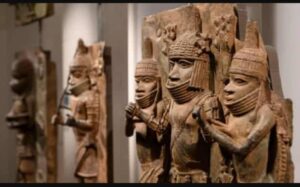 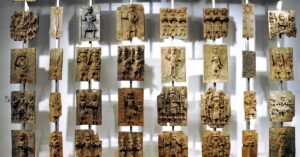 The Benin Kingdom was invaded by British forces in 1897. It must however be noted that the Commander of the British forces spearheading the invasion, had indicated in a pre-attack despatch sent to the British Home office that he and his forces planned to loot Benin of its famed treasures housed in the king’s palace to offset the cost of prosecuting the war against Benin. 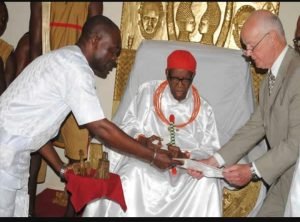 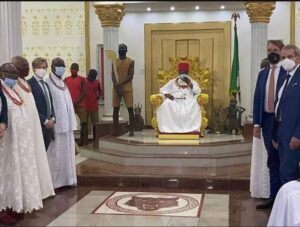 The despatch read: “I, therefore, ask for his lordship’s permission to visit Benin City in February next (1897) to depose and remove the king and to establish a native council in his place and to take such further steps for the opening up of the country as the occasion may require. But in order to obviate any danger [of attack], I wish to take up a sufficient armed force, consisting of 250 troops, two seven pounder guns, one Maxim and one Rocket apparatus.

PS I would add that I have reason to hope that sufficient ivory may be found in the king’s house to pay for the expenses in removing the king from his stool.”

In response, The British Foreign Office had preached caution. But Phillips determined to carry out his attack plans were undaunted and on his own accord, marched into Benin during the festive period of Igue festival, when the king did not entertain any visitors by tradition. He was attacked and killed alongside some members of his party at Ugbine in the outskirts of Benin in 1897. 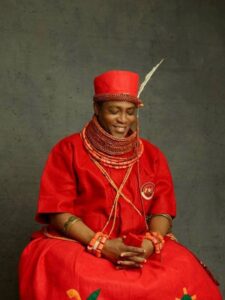 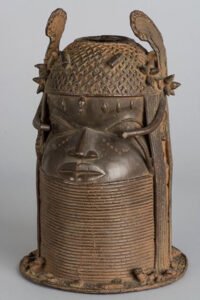 In a reprisal attack, British forces led some foot soldiers of the Royal Niger Constabulary to attack and loot the Benin palace and houses of prominent chiefs. Most of the carvings and artefacts were said to be “looted directly from altars which were covered with remnants of various sacrifices”

The various bronze memorial heads which were cast after each Oba’s demise, including carved ivory tusks and pendants, were taken from palace shrines without recording the relative positions of which particular Oba the crafts commemorated.

The crafts served as historical accounts of their pasts and other commemorative events and were created as pictorial depictions of history similar to the Egyptian hieroglyphics.

Oba Ovonramwen was the reigning monarch when Benin was plundered.  He was exiled to Calabar, hundreds of kilometres away from his Kingdom which refused to crown another king while he was still alive, in strict adherence to tradition.

Oba Ovonramwen’s Grandson, Oba Akenzua ll introduced massive reforms and a cultural reawakening of Benin under the colonial government of Nigeria as soon as he was crowned in the 1930s.  This included restitution of looted Benin artefacts from various parts of the globe.  In That same decade of the 1930s, the Earl of Plymouth accompanied by Sir John McPherson who later became governor-general of Nigeria returned the royal regalia which was part of the loot from Oba Ovonramwen’s palace during the invasion of 1897.

Since then, diplomatic efforts by successive Benin monarchs with the support of the federal government of Nigeria have been deflected by the British government by mere promises of the potential return of the thousands of looted artefacts which were shared among the soldiers and others sold off to various European nations in the 19th and 20th centuries. While some individuals have returned their own share of the loot, others have held on to theirs.

In February 2011, a planned London auctioning by Sotheby of a Benin ivory pendant kept by the family of Galwey, one of the soldiers involved in the 1897 looting of Benin royal palace, was rebuffed by an international coalition of activists including Nigerians through phone calls to the famous artwork auctioning firm to call off the proposed sale of the stolen artefacts, which was heeded.

Just recently in May 2021, German Cultural Ministry’s officials visited the reigning Benin monarch- Oba Ewuare ll – and announced that over 1,000 looted artefacts will be returned to Benin by October 2021 to the Benin Kingdom through the federal government of Nigeria.

Dr Andreas Gorgen, the Director-General for culture and communication in the German foreign ministry, acknowledged publicly the looting of Benin artefacts and reiterated the commitment of the German authorities to return the artefacts in their possession and also assist the Benin Kingdom in the restoration of some of the sculptures possibly damaged during transportation or pillage.

Oba Ewuare ll had earlier revealed that a mutual agreement was made with the current Governor of Edo State, Mr. Godwin Obaseki to house the returned artefacts in a special facility (the Benin Royal Museum) that will be built by the Benin Kingdom in the premises of the royal quarters of Benin.  However, in a twist, the Edo State government was said to favour the possession of the returned artefacts by a newly incorporated private company which will house the items instead of the earlier agreed Benin royal quarters under the supervision of the Benin Traditional Council headed by the Benin monarch who is the custodian of Benin cultures and traditions till date.

The controversy became stoked with the latest pronouncement of the Minister of Information and Culture, Alhaji Lai Mohammed that the artefacts to be returned will be possessed by the federal government of Nigeria instead.

This has generated lots of reactions with various prominent voices especially in the Benin Kingdom advising that the artefacts need to be returned without any encumbrances, to the palace of the Oba of Benin where they were stolen from as recorded in history.

Moreover, every other returned artefact both during pre-and post-colonial Nigeria have always been returned to the reigning Benin monarchs who are direct descendants of the original owners of the looted works.

During a Sallah visit to Oba Ewuare ll in the third week of July 2021, the chief Imam of Benin Alhaji Abdulfatai Enabulele, backed by Muslim faithful in Edo State, pledged the support of the Muslim community in the state for the Benin monarch to take custody of the returned artefacts which were not mere artworks but symbols of Benin royal traditions and culture.

According to the Imam, “we Muslims do not support what is not right and what will cause conflicts, problems and crises.  We will always support what brings peace and development. We are not in support of the plan by the Edo State government to house the artefacts at the state-proposed Edo Museum of West African Arts (EMOWAA) instead of the Benin Royal Museum (proposed by the Benin Kingdom).”

Some Senior Advocates of Nigeria, historians and Benin leaders also lent their voices and supported the Oba of Benin in his quest to take possession of his great-great-grandfather’s properties.

A former federal commissioner for works, Femi Okunnu, SAN opined that the state government of Edo had no say in the artefacts that would be returned by the German authorities. According to him, “any artefact stolen from the Benin palace belongs to the Benin palace. However, with due respect to the Oba of Benin, this is a matter between the German and the Federal Government of Nigeria. The state has no transaction on this matter. If there is to be any transaction, it should be between the Federal Government and the Benin palace”.

Chief Mike Ozekhome, SAN on his own part, enthused that “by God’s grace, I believe everything will be sorted out.

On his part, the acting Head of Department, International Studies and Diplomacy of Benson Idahosa University, Mike Okemi said there was no way the Edo state government can lay claims to the looted items. “In Benin Kingdom, those who produce the artefacts, the craftsmen, did so for the Oba free-of-charge and they did so whenever the Oba desired. The artefacts belong to the Oba, and they are his personal property. Therefore, those items should be handed back to the Oba.”

Historical precedents clearly showed that every returned looted artefact from Benin have so far been handed back to the reigning monarch and as such, the ones to be returned by the German authorities should follow the same path.

As most experts contend, the artefacts represent Benin spirituality and traditional heritage and not just pictorial pleasures for mercantile opportunities.

From Germany to Namibia

Heirs to The Throne

Sights, Sound, and Sites of the Grand Bonny Kingdom