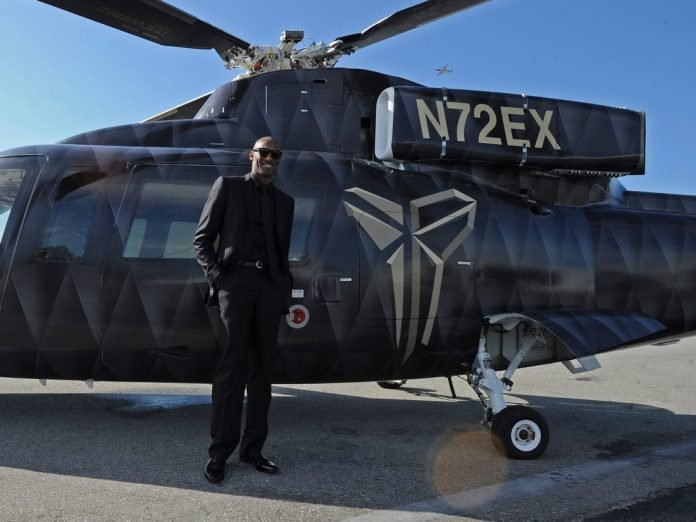 Professional athletes have a reputation for liking the finer things in life — fancy cars, expensive blings and lavish mansions big enough to sleep all of their teammates. But that’s old news, today’s elite athletes are taking luxury to new heights, because why drive, when you can fly?!

If you’ve ever spent time in the Los Angeles area, you know rush hour traffic is brutal! Which is exactly why the former L.A. Lakers star Kobe Bryant paid between $500,000 and $750,000 for his private helicopter. Bryant’s helicopter, a Sikorsky S-76B built in 1991, was previously owned by the State of Illinois. The state flew the helicopter from 2007 to 2015, when it was put up for sale.

Besides commuting back and forth to the Staples Center, Kobe occasionally used the “Mambacopter” as he called it, for pleasure. According to some of his former Lakers teammates, Kobe flew them to Las Vegas and rented out the top floor of the MGM Grand casino.

The sporting world was however thrown into mourning on Sunday, January 26, 2020, when Kobe, one of the greatest basketball players in history, met an untimely death at the age of 41, after a fatal helicopter crash. Bryant, who was on-board his helicopter with eight others, including his 13-year-old daughter, crashed near Calabasas, 30 miles North West of downtown Los Angeles, due to foggy weather. The late basketball legend, who loathed traffic jams, commuted from his home in Los Angeles to Staples Center, the home of his former club, LA Lakers and elsewhere, in his helicopter, until the tragic event.

Although, met with an unfortunate death in his private flight machine, Kobe is not the only athlete who likes some extra comfort. Here are 12 other professional athletes, who like to live life on the luxurious side with their private jets.

Also known as “Air Jordan” during his playing days, NBA legend, Michael Jordan, has taken his nickname to new heights with his custom built private jet. Because the best deserve the best, Jordan spent $50 million on a Gulfstream IV twinjet aircraft. And just so there’s no confusion as to who owns this multi-million dollar flying machine, MJ customized his jet by painting it Carolina blue, and selected the ID number “236MJ”. The number 23 represents his jersey number, the number 6 represents the number of NBA titles he has won and the letter J represents the first letter of his name.

Jordan’s pricey jet features two Rolls Royce engines that reach a cruising speed of 600 MPH. Although he hasn’t played in a NBA game since April 16, 2003, he still makes more money than any active player! According to Forbes, Jordan earned $100 million in 2014 off his signature shoes alone, and now has a net worth of $1 billion. With a bankroll like that, sky’s the limit for MJ — or maybe not…

Love him or hate him, there’s no denying, Floyd “Money” Mayweather has some serious cash. With a Forbes estimate of more than $700 million, Mayweather is not shy about spending his money. Mayweather owns not one, but two private jets, each worth around $40 million. His jets, which are a Gulfstream V and Gulfstream IV aircraft, are used for both work and leisure; Floyd rides aboard his Gulfstream V with his family, and reserves his Gulfstream IV for his massive entourage.

Members of his entourage a.k.a. The Money Team, include 4 bodyguards, 2 full-time massage therapists, a personal barber, and a flight attendant employed to carry his hand-sanitizer (he has a phobia of germs). The Champ uses his jets to fly back and forth from his massive mansions in Las Vegas and Miami.

Gisele purchased a private jet for herself and her family since they are always on the go, flying back and forth from their LA home to Brady’s work in Boston and Gisele’s work in Paris and San Paulo, where the family is based. Brady doesn’t commute with the rest of his team members in a commercial flight, instead he travels with his wife and kids in their sleek black Gulfstream jet.

Not many men can bounce back from a $110 million divorce settlement and still afford to buy a $53 million private jet. But then again, not many men are Tiger Woods. Thanks to his huge endorsement deals, Tiger retains his status as one of the richest athletes in the world, according to Forbes. In addition to his super exclusive $53 million Gulfstream G550, Woods paid $20 million for a 155-foot yacht in 2004, and $60 million for a mega mansion in Jupiter, Florida. His ego might be hurt, but his wallet is just fine!

Although he’s not an athlete, Dallas Mavericks owner, Mark Cuban, is one of the most popular and powerful men in sports. With an estimated net worth of $3 billion, Cuban has plenty of cash to blow on expensive toys. Which is why Cuban doesn’t own “a” private jet… He owns three!

The purchase of his first jet, a Gulfstream V, made internet history because he searched for and paid for it on the internet. The $40 million purchase put him in the Guinness Book of World Records, where he still holds the title for the largest single e-commerce transaction. Cuban owns two Boeing Business Jets. According to the Dallas Morning News, Cuban paid $144 million for his Boeing 767-277.

With a net worth close to $800 million, Formula One legend, Michael Schumacher, has enough cash to buy an entire airline. Instead, Schumacher dropped $22 million on a Falcon 200 private jet. One can only imagine Schumacher’s jet has taken several trips to the private island given to him by the Crown Prince of Dubai after his final Grand Prix race. Schumacher’s island is valued at $7 million. That’s one hell of a farewell gift!

Like the other guys on this list, Phil Mickelson is no stranger to the Forbes list. In 2015, Mickelson earned $51 million, with a majority ($48 million) coming from endorsements. Thanks to sponsorship deals with big time companies like Callaway, Barclays, KPMG, and Rolex, Mickelson was able to afford a $40 million jet Gulfstream, which is a 14 seater aircraft featuring a bunch of advanced technical equipment.

Mickelson’s luxurious private jet can seat up to 19 passengers. In addition to its spacious cabin, Mickelson’s jet features some other pretty sweet amenities — a private dining area, a kitchen larger than most commercial airplanes (stocked with plenty of high-end booze) and two custom bathrooms. Mickelson pilots his 40 million-dollar Gulfstream V airplane to his golf tournaments. It flies up to 51,000 feet at Mach 0.885, designed to fly intercontinental in one flight.

Being a sharpshooter at your job, doesn’t make you equally street smart, and Pippen is proof of this. Known as one of the NBA’s smartest players on the court, legendary Chicago Bull player, Scottie Pippen, is seriously lacking in financial management. Pippen blew $120 million (not a typo!) on a number of poor investments, including a Gulfstream aircraft. In 2002, Pippen paid $4.3 million for this Gulfstream, but failed to have the jet inspected prior to his purchase. This failed inspection cost Pippen greatly as he found out the jet needed more than $1 million in repairs! Unable to come up with the cash to repair his broken jet, Pippen was forced to leave the plane sitting on the runway.

NBA legend turned entrepreneur, Magic Johnson, purchased his first Gulfstream jet in 2004. Popular celebrity website celebritynetworth.com, estimates Magic is worth a cool $500 million. Not bad for a guy who “only” made $18 million during his 13-year NBA career!

According to his personal flight attendant, Magic has a very specific list of demands for in-flight food and beverage — including, Red Vine liquorice, which she has to squeeze to make sure it’s extra soft. When you’re rolling in dough, you can make some crazy demands!

During his 21-year professional career, international soccer star, David Beckham, played for teams in England, Spain, U.S.A., and France. With a crazy travel schedule, and a net worth of $350 million, it was only fitting Beckham purchase his own private jet.

Beckham, who is currently the president of the Inter Miami CF club, also has a lot of other businesses on his hands which include endorsement deals he signed with some multinational companies while playing for Manchester United. Although he might have retired from playing professional football, he’s still a force to be reckoned with when it comes to travelling with style anywhere around the world, leading him to acquire a powerful Bombardier Challenger 350, which cost $26 Million. His Challenger aircraft has a high speed of 850km/h at mach 0.82 and long-range speed of 871km/h at mach 0.80.

In 2017, the news about the talented young Brazilian wing-forward, Neymar Jr, signing a multi-millionaire contract with the French club Paris Saint-Germaine (PSG) was all over the media. Both the club and the player have highly profited from this deal; PSG got an incredibly gifted footballer, and Neymar became the highest paid football player in the world. Neymar owns an Embraer Phenom 100 jet. The aircraft bears his initials “NRJ”.  Built in 2011, and with a serial number of 203, this aircraft has a price of approximately US$ 4 million. He also owns another jet, a Cessna Citation 680, registered to Neymar Sports and Marketing. This jet was built in 2008 and has a price of around US$ 5 million. In 2013, Neymar added a helicopter to his flying machines. The helicopter, a Eurocopter EC130B4, also has his initials, NJR, on its tail. A Eurocopter EC130 has a price of US$ 4 million.

Portuguese professional soccer player, Cristiano Ronaldo, is currently regarded as one of the best footballers of all time. With a net worth of $460 million, he is also one of the richest athletes in the world. The Juventus club star, who was previously signed under Real Madrid for almost 10 years, owns an 18-seater Gulfstream G650 valued at $65 million. Ronaldo uses it to fly around the world on his marketing missions. When he is not using his jet, the superstar rents it out at a cost of $7000 an hour to recoup some of the cost. The aircraft features separate bathrooms for the crew and passengers, wardrobes, internet access, telephone, and a host of other modern electrical appliances.

Nollywood to the world!

Back to their Roots