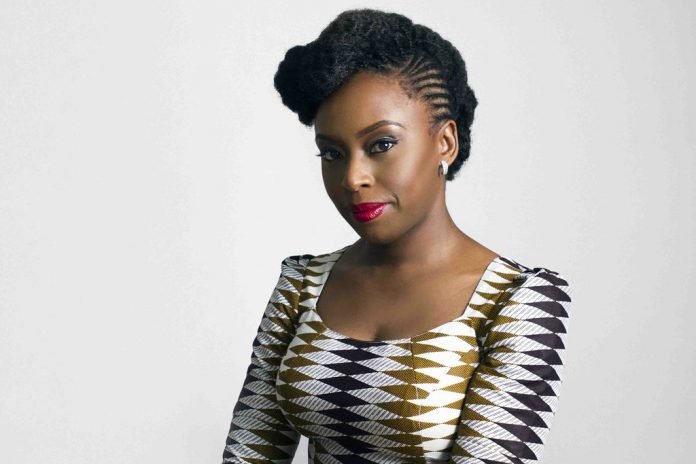 There is a rather large number of writers I like. but only a few that inspire my deepest admiration (and the slightest hint of envy). Chimamanda Ngozi Adichie belongs in this latter category. Her fiction oozes with profound observation, wits, and wisdom, all while remaining immensely entertaining Naturally, l am inclined to listen whenever this astonishing talent speaks, even (or especially) when she, with remarkable insistence, utters the F-word. Indeed, feminist used to be one of those terms that caused me to react with visceral aversion. Too many times have I encountered women that identiﬁed as feminists, but who appeared primarily resentful, bitter, and irritable. I experienced these women as vengeful, misandrous harpies, eager to drive their claws into any poor guy who. willingly or unwillingly, uttered the slightest verbal faux pas. Wrathful and single-minded as they were. they would even perceive a friendly “good morning” as a chauvinistic attempt in male dominance. In short, they resented men, at least the heterosexual subset of this population, and were, therefore, best avoided.

Much of this perception was quite obviously due to my uncritical acceptance of common stereotypes. Worse, some harsh reactions were probably deserved, as a retrospective glance—from a (hopefully) wiser but certainly more experienced perspective—suggests. Nonetheless, some feminists, especially their academic representatives, appeared to be committed to hard-headed dogmatism—out of touch not only with men but also with most women. This appears, to a signiﬁcant part, the result of deep mistrust against various aspects of heterosexual relationships, a stance that places them frequently in a strange alliance with the most prude conservatives.

It was, therefore, eye-opening when Chimamanda Ngozi Adichie, in a previous book-length essay We Should all be Feminists, embraced a straightforward and surprisingly undogmatic take on feminism, resting on the basic assumption of the full equality of men and women. This simple axiom does not only seem self- evident, it should also be easy to accept by all intelligent men (easier than the assertion of their collective naughtiness, anyway).

But while I can easily embrace this kind of feminism, it also comes with important implementation challenges. Most importantly, it raises the question of what parents of daughters, including fathers like myself, should do to raise girls in the true spirit of gender equality. The follow-up essay Dear Ijeawele, or A Feminist Manifesto in ﬁfteen Suggestions addresses this very issue. Presented in epistolary form—in response to a female Nigerian friend (the titular Ijeawele) who inquired how to raise her baby girl into a feminist—Ms. Adichie suggests ﬁfteen parenting guidelines. She proposes the outright rejection of some gender—speciﬁc norms. They include the framing of marriage as a personal achievement or, especially, of likeability as the holy grail of womanhood. The all- too—common presentation of female sexuality and the female body as shameful must be rejected with equal vehemence. Other suggestions, however, focus on installing an understanding of the right to make personal choices. Parenthood, housework, and joining the workforce are not masculine or feminine domains per se but a coordinated decision that each couple should make consensually. To develop autonomous opinions and critically question their environment, Ms. Adichie urges parents to make their daughters aware of biased language, to inform them about the world’s ubiquitous diversity, and, not surprisingly, to turn them into avid readers.

In short, Dear Ijeawele urges parents to teach their daughters to accept some gender—specific norms, to reject others, and to be intelligent and independent enough to know the difference.

To summarize, Dear Ijeawele is not, and does not try to be an exhaustive parenting manual. Instead, it is an insightful, and highly readable. essay by a remarkably gifted author. As in most of her ﬁction, Ms. Adichie remains inspired by her native Nigerian (speciﬁcally Igbo) culture but speaks with a voice of universal wisdom. Dear Ijeawele or A Feminist Manifesto in Fifteen Suggestions presents immensely useful proposals for further discussion and development, while intellectually sﬁrnulating and educating the reader. It is, therefore, wholeheartedly recommended. Alexander Schuhr is of the Good Men Project, which has pioneered the largest worldwide conversation about what it means to be a good man in the 21st century.

Where There Is A Will

Helen Oyeyemi Dishes Up Magic in Her New Novel GINGERBREAD

Must See Places In Kaduna

Ola Rotimi A Complete Man of the Theatre