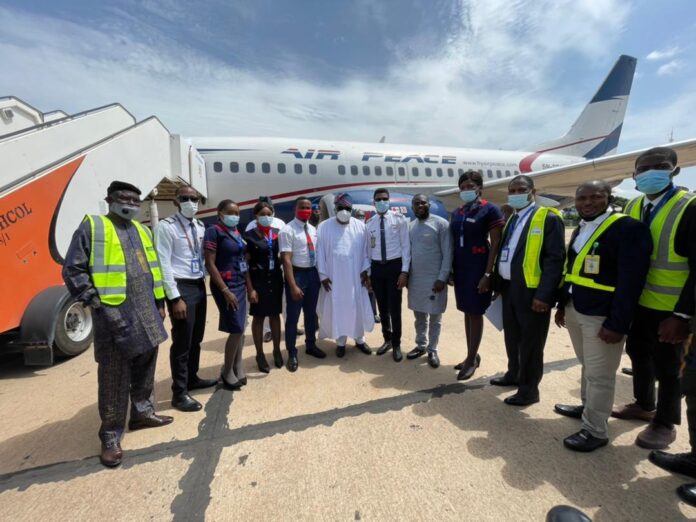 Air Peace, Nigeria’s biggest airline, has commenced daily flights to Ilorin from Lagos and Ilorin to Abuja as part of its expansion drive and realization of its no-city-level-behind policy to connect major cities in Nigeria. 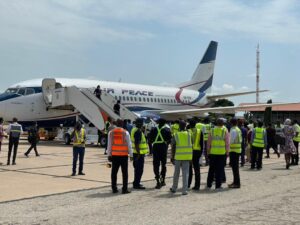 The inaugural P47110 flight from the Murtala Muhammed Airport, Lagos landed at the Ilorin International Airport amidst excitement from stakeholders and the Governor of Kwara State, Alhaji Abdulrahman Abdulrazaq, who was represented by the Deputy Governor of the state, Otunba Kayode Alabi.

Also, the National President of the Ilorin Emirates Descendants Progressive Union (IEDPU) representing Ilorin indigenes at home and in the Diaspora, Alhaji Ota Aliyu Uthman, was on the ground to welcome the flight. 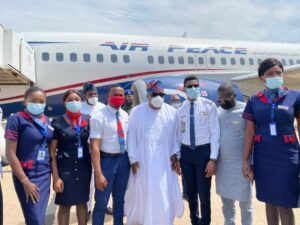 Safety Manager of the Airline, Capt. Godfrey Ogbogu who represented the Chairman/CEO of the Airline, Mr. Allen Onyema said the commencement of the Ilorin flights “signifies the provision of more network options and connectivity for the people in the Middle Belt region.”

Ogbogu described the daily flights into Ilorin from Lagos and Abuja as “a momentous feat”, saying it would boost the economy of the state and generate employment for the unemployed people in the state. 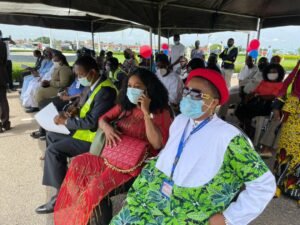 “If you have been keeping tabs on the trajectory of Air Peace, you will have noticed our strategic and consistent route network expansion. This is driven by our unwavering resolve to plug the gaps in Nigeria’s Air travel and more importantly, give the Nigerian flying public multiple network options,” he said.

The Safety Manager said Air Peace has become famous for its ‘No-City-Left-Behind’ initiative and added that the goal of the initiative is to interconnect various cities in Nigeria and beyond in order to tremendously impact the country’s economic indices. 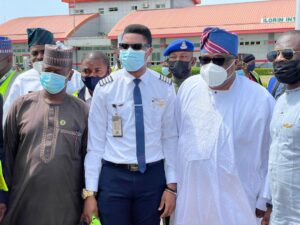 “And this explains why we have also extended our wings to Ilorin. With the support of the state government, under the visionary leadership of His Excellency, Abdulrahman Abdulrazaq, whom we are profusely grateful to, Air Peace is promising the people of Ilorin and its environs seamless and affordable air travel. 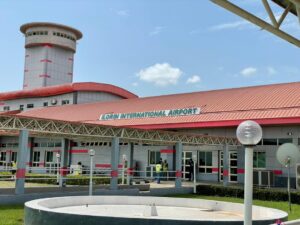 “As we commence daily flights into Ilorin from Lagos and Abuja today, we are promising that this new route will be optimally serviced, and Nigerians, especially Ilorin residents, will vastly benefit from it. We also pledge to work concertedly with all the stakeholders in the state, the aviation regulator, the airport administrator, and of course the state government to ensure we maximize the gains of air travel and sustain the impact.”

He solicited “the continued support and cooperation of all relevant stakeholders for the airline to keep soaring high.” 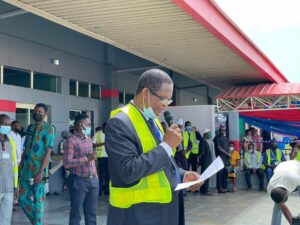 In his remarks, the Governor of Kwara State hailed the airline for taking a great management decision to commence the flights into Ilorin from Lagos and Abuja. Noting that the Air Peace flight would support the state’s drive towards industrialization, the Governor explained that the inaugural flight testifies to how the state has evolved as a new investment destination in Nigeria. He promised that the state government would provide the requisite support and encouragement for the airline to succeed on the Ilorin route.

The Vice-President of the National Association of Nigerian Travel Agencies (NANTA), South-West Zone Comrade Ezekiel Afolabi commended Air Peace for the bold decision to connect Ilorin, urging the airline to replicate the same in other states in the South-West.

Unwind In The Gambia

Beyonce‘ ROARS IN AFRO BEAT IN “Gift To AFRICA”