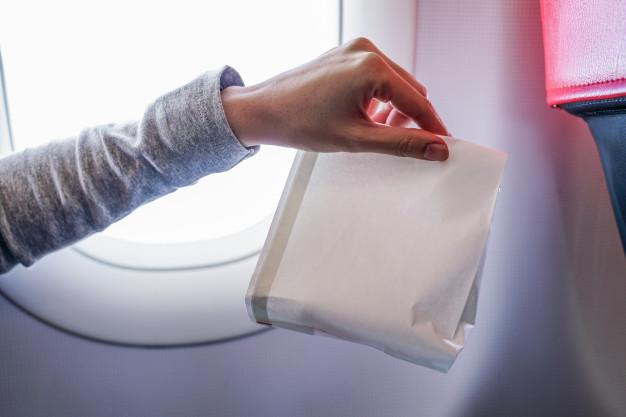 While anyone can get airsick, some people are more susceptible to it and have problems practically every time they travel by plane.
Airsickness, medical experts say is a type of motion discomfort, caused by conﬂicting signals your senses tell your brain. Your eyes adjust to the lack of movement around you and send a message to your brain that you are sitting still. Your inner ear, however, senses the actual movement. The conﬂicting signals result in nausea and sometimes vomiting. Fortunately, there are some things that you can do to avoid getting sick on an airplane. Here are 10 things to do before and during the flight to help you have a relaxed ﬂight.

Avoid heavy meals. Pay attention to what you eat for at least 24 hours before your trip. Try not to eat fatty, greasy, or heavily spiced or salted meals. Instead, try eating smaller, but more frequent meals or snacks, prior to your ﬂight. Avoid eating a heavy meal just before traveling. Try not to eat anything immediately before ﬂying, but don’t board the plane with an empty stomach either.

Alcohol intake prior to traveling can be a trigger for airsickness in many people. Try to avoid consuming alcohol, and also be sure to drink plenty of water Choose your seat carefully. Most of the time, you can choose your seat as you purchase your plane ticket. Take care to choose a seat over the wing, and by the window. The seats over the wings will feel the least amount of motion during ﬂight. Having a window seat will allow you to focus your gaze on the horizon, but those seats are not available, then choose a seat very near the front of the plane, and by the window. The front of the plane is another section that feels less motion while in ﬂight.

Alcohol intake prior to traveling can be a trigger for air sickness in many people. Try to avoid consuming alcoholic beverages just before embarking onatrip

Preventing airsickness is better than trying to treat it once the symptoms have started. Your doctor may be able to help by prescribing medications used to prevent motion sickness. Several classes of medications are evadable, we have the over the counter medications, such as dimenhydrinate (Dramamine), and meclizine. More effective agents are evadable with a prescription, such as scopolamine products.

Although the evidence surrounding the effectiveness of acupressure or ginger is not entirely conclusive, some people believe that these options are effective. The bands apply pressure on the wrist to stimulate acupressure points, believed to help with controlling nausea and vomiting

Avoid reading or playing hand-held games. Focusing on something closer to your face and eyes worsens the confused motion signals in your brain. Instead, listen to music. Listening to music with headphones can help you to focus on the music, relax your mind and body, and block out any noises around you that may heighten your stress and anxiety, like crying babies, or other people that may be airsick.

Focus On The Horizon

Make sure you have fresh air blowing around your tace Breathing fresh, cool, air can help you to relax, and keep you from becoming too hot. Personal mini fans may also help to keep the air cool, and moving around you.

If you begin to feel queasy, stand up. Lying back or lying over in the seat is not helpfuL Standing up can help your body to establish a sense of balance, and hopefully counteract the feeling of nausea.

Get plenty of rest, this helps your body maintain a more relaxed state while airborne. Drink plenty of water during your flight to stay hydrated and try to stay positive.

Ujuju The soup with a story

Chef Taylor’s Pick Of The Month

Look At Me Green